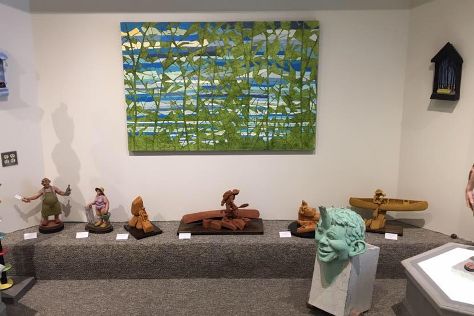 It's home to a diverse population and perched on the River Thames, but that's where the similarities end between the city of London in Canada, and it's much more famous British counterpart.

Kick off your visit on the 19th (Sat): take in the exciting artwork at Jonathon Bancroft-Snell Gallery, get engrossed in the history at The Secrets of Radar Museum, then brush up on your military savvy at Jet Aircraft Museum, and finally look for all kinds of wild species at Sifton Bog. Get ready for a full day of sightseeing on the 20th (Sun): contemplate in the serene atmosphere at Old St Thomas Church, then take an in-depth tour of Banting House National Historic Site, then brush up on your military savvy at The Royal Canadian Regiment Museum, and finally get your game on at BATL - The Backyard Axe Throwing League.

For traveler tips, more things to do, where to stay, and other tourist information, you can read our London day trip site.

Toronto to London is an approximately 2.5-hour car ride. You can also take a train; or take a bus. The time zone changes from Eastern Standard Time (EST) to Central Standard Time (CST), which is usually a -1 hour difference. Wrap up your sightseeing on the 21st (Mon) to allow time to travel to Wichita.
more less

Things to do in London

©
You'll explore the less-touristy side of things at Seelye Mansion and Frank Lloyd Wright's Allen House. Wichita Sedgwick County Historical Museum and Coleman Museum and Factory Outlet are good opportunities to explore the local culture. Venture out of the city with trips to Butler County History Center and Kansas Oil Museum (in El Dorado) and Dwight D. Eisenhower Library and Museum (in Abilene).

For more things to do, reviews, maps, and tourist information, go to the Wichita trip builder website.

You can drive from London to Wichita in 16.5 hours. Alternatively, you can do a combination of car and flight; or drive. In December, daily temperatures in Wichita can reach 9°C, while at night they dip to -3°C. On the 26th (Sat), wrap the sightseeing up by early afternoon so you can travel back home.
more less

Things to do in Wichita