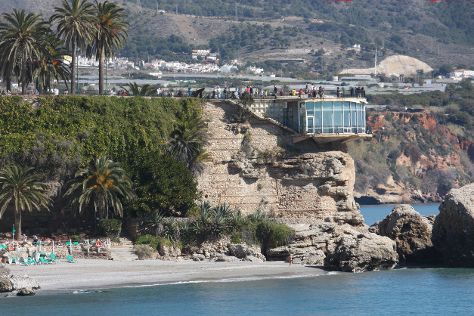 ©
Nerja is a municipality on the Costa del Sol in the province of Málaga in the autonomous community of Andalusia in southern Spain. On the 20th (Thu), Head underground at Fundación Cueva de Nerja, kick back and relax at Burriana Beach, then contemplate in the serene atmosphere at Church of El Salvador, then take in panoramic vistas at Balcony of Europe, and finally pick up a one of a kind souvenir at Nerja Book Centre.

Manchester, UK to Nerja is an approximately 8-hour combination of flight and bus. You can also do a combination of bus and flight; or do a combination of train, flight, and bus. The time zone difference when traveling from Manchester to Nerja is 1 hour. When traveling from Manchester in August, plan for much warmer days in Nerja, with highs around 39°C, while nights are a bit warmer with lows around 22°C. Finish your sightseeing early on the 20th (Thu) so you can drive to Ronda.
more less

Things to do in Nerja

Renowned for its deep gorge, the quaint, whitewashed village of Ronda has preserved its charm as an Andalusian country village.

Kick off your visit on the 21st (Fri): take some stellar pictures from Mirador de Aldehuela, take in breathtaking views at El Tajo de Ronda, then take in the views from Puente Nuevo, and finally don't miss a visit to Alameda Del Tajo.

To find maps, more things to do, where to stay, and other tourist information, refer to the Ronda route tool.

Getting from Nerja to Ronda by car takes about 2.5 hours. Other options: take a bus; or do a combination of bus and train. August in Ronda sees daily highs of 41°C and lows of 23°C at night. Cap off your sightseeing on the 21st (Fri) early enough to catch the bus to Marbella.
more less

Things to do in Ronda 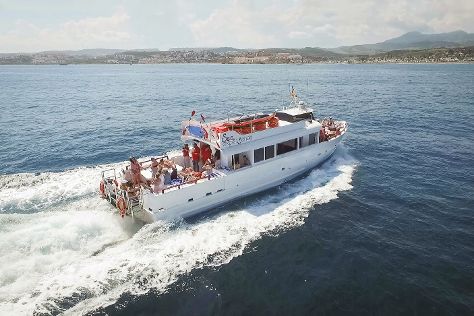 Once a village of humble fishermen, Marbella is now one of the most cosmopolitan beach resorts on Spain’s world-famous Costa del Sol, boasting swanky nightclubs, classy hotels, and expensive restaurants.

Getting from Ronda to Marbella by bus takes about 1.5 hours. Other options: drive. When traveling from Ronda in August, plan for little chillier days and about the same nights in Marbella: temperatures range from 36°C by day to 25°C at night. Finish your sightseeing early on the 24th (Mon) so you can travel back home.
more less

Things to do in Marbella