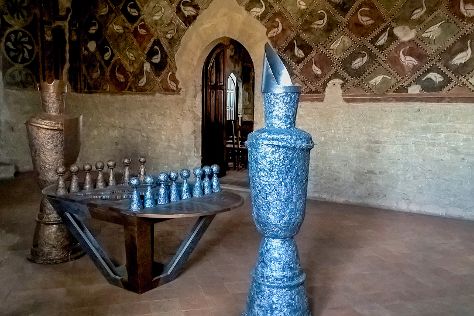 ©
Sperlonga is a coastal town in the province of Latina, Italy, about halfway between Rome and Naples.Surrounding towns include Terracina to the West, Fondi to the North, Itri to the North-East, and Gaeta to the East.HistoryLocated near the Via Appia, but also on the edge of the Pontine Marshes, Roman "Spelunca" (Latin for cave or grotto) was only known for the grotto on the coast, after which it was named. You'll explore and learn at Tarsie Turri and Mostra Permanente Tommaso Gismondi. You'll explore the less-touristy side of things at Cattedrale di Santa Maria - sec. XI-XII and Beach Head War Cemetery. Explore the numerous day-trip ideas around Sperlonga: Eremo Sant'Erasmo (in Roccagorga), Rifugi Antiaerei (in Colleferro) and Palazzo di Bonifacio VIII (in Anagni). Spend the 5th (Thu) exploring nature at Parco Nazionale d'Abruzzo. And it doesn't end there: get outside with Lido Le Tre Conchiglie, appreciate the extensive heritage of Centro Storico, see the interesting displays at Museo Della Civilta Contadina E dell'Ulivo, and admire the striking features of Villa Di Tiberio.

If you are flying in from United Kingdom, the closest major airports are Leonardo da Vinci–Fiumicino Airport, Naples International Airport and Ciampino–G. B. Pastine International Airport. In September, daily temperatures in Sperlonga can reach 30°C, while at night they dip to 17°C. Wrap up your sightseeing on the 6th (Fri) early enough to travel back home.
more less

Things to do in Sperlonga