Situated in a basin between two mountain ranges, Taipei appeals to tourists with its blend of Asian cultures, living side by side amidst Japanese-era mansions and Taoist temples.

Start off your visit on the 20th (Sun): stroll through Taipei Zoo, admire the sheer force of Wufengchi Waterfall, and then hunt for treasures at Shilin Nightmarket. On the 21st (Mon), you'll have a packed day of sightseeing: admire the landmark architecture of Taipei 101, then get engrossed in the history at National Palace Museum, and then wander the streets of Ximending.

Use the Route module to find travel options from your starting location to Taipei. In January in Taipei, expect temperatures between 22°C during the day and 16°C at night. Finish up your sightseeing early on the 22nd (Tue) so you can travel to Xiulin.
more less

Things to do in Taipei 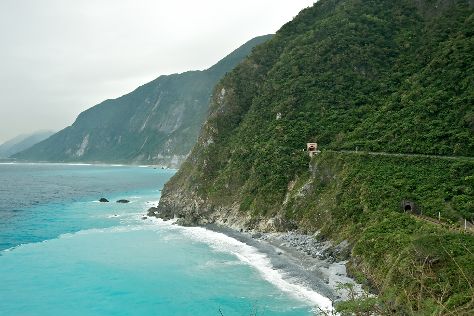 ©
Taroko Gorge has been added to your itinerary. Start off your visit on the 27th (Sun): admire the verdant scenery at Mugua River Valley, then tour the pleasant surroundings at Shakadang Trail, and then stroll through Taroko Gorge. On the 28th (Mon), you'll have a packed day of sightseeing: tour the pleasant surroundings at Ch'ing-shui Cliff and then contemplate the long history of A Mei Wenhua Village.

To see reviews, other places to visit, and other tourist information, go to the Xiulin online vacation planner .

You can do a combination of subway and flight from Taipei to Xiulin in 2.5 hours. Alternatively, you can take a train; or do a combination of bus and train. Wrap up your sightseeing by early afternoon on the 29th (Tue) to allow enough time to travel back home.
more less

Things to do in Xiulin

A Mei Wenhua Village
Find places to stay Jan 22 — 23:
Hotels on TripAdvisor
Homes on Airbnb
Highlights from your plan