The capital and largest city in the country, Ulaanbaatar stands as Mongolia's transport, cultural, and commercial hub.

On the 1st (Sun), hit the best photo ops around with an inspiring photography tour, shop like a local with 976 Art Gallery, and then take in the spiritual surroundings of Dashchoilin Monastery.

To find maps, photos, other places to visit, and other tourist information, use the Ulaanbaatar tour planner.

If you are flying in from Germany, the closest major aiport is Chinggis Khaan International Airport. March in Ulaanbaatar sees daily highs of 0°C and lows of -17°C at night. Cap off your sightseeing on the 2nd (Mon) early enough to travel to Gorkhi Terelj National Park.
more less

Things to do in Ulaanbaatar

©
Kick off your visit on the 2nd (Mon): take a pleasant ride with a tour on horseback.

Things to do in Gorkhi Terelj National Park

To find more things to do, reviews, maps, and other tourist information, you can read our Ulaanbaatar travel route builder tool.

The Route module can help you plan travel from Gorkhi Terelj National Park to Ulaanbaatar. Wrap up your sightseeing on the 3rd (Tue) to allow time to travel to Irkutsk.
more less

Things to do in Ulaanbaatar

The most popular stop on the Trans-Siberian railway, Irkutsk gained fame as the cultural center of Decembrist exiles.

You can fly from Ulaanbaatar to Irkutsk in 1.5 hours. Alternatively, you can drive; or take a train. In March in Irkutsk, expect temperatures between 1°C during the day and -14°C at night. You'll set off for Listvyanka on the 5th (Thu).
more less

Things to do in Irkutsk

Traveling by car from Irkutsk to Listvyanka takes 1.5 hours. Alternatively, you can ride a ferry. Expect a daytime high around 1°C in March, and nighttime lows around -14°C. Finish your sightseeing early on the 6th (Fri) so you can travel to Khuzhir.
more less

Things to do in Listvyanka

©
On the 6th (Fri), get outside with Bazarnaya Bay and then make a trip to Monument Brodyage. Get ready for a full day of sightseeing on the 7th (Sat): don't miss a visit to Buddhist Stupa, identify plant and animal life at Cape Kharantsy, then take an in-depth tour of Khuzhir Local Lora Museum of Revyakin, then make a trip to Cape Burkhan/Shamanka Rock, and finally take in the architecture and atmosphere at Church of the Reigning Mother of God.

For ratings, photos, and more tourist information, you can read our Khuzhir driving holiday planning app.

Getting from Listvyanka to Khuzhir by car takes about 5.5 hours. Wrap up your sightseeing by early afternoon on the 8th (Sun) to allow time for travel to Irkutsk.
more less

Things to do in Khuzhir

Kick off your visit on the 9th (Mon): stroll the grounds of Lisikhinskoye Cemetery, pause for some photo ops at Monument Enforcement Officers Killed in the Line of Duty, appreciate the history behind Irkutsk Sculpture Park, then admire the striking features of House Feinberg, then ponder the design of Fountain Near The Wedding Palace, and finally get engrossed in the history at Museum of Urban Life.

Plan my Irkutsk trip by asking Inpirock to come up with tips and suggestions.

Getting from Khuzhir to Irkutsk by car takes about 4.5 hours. Wrap up your sightseeing on the 9th (Mon) early enough to travel to Krasnoyarsk.
more less

Things to do in Irkutsk 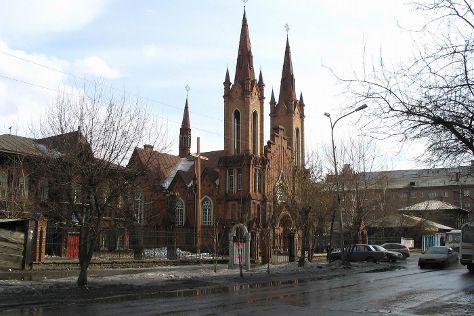 Famed for its scenic location, Krasnoyarsk so impressed author Anton Chekhov that he considered it Siberia's most appealing city, describing it as a "picturesque, cultured town." A convenient pit stop for passengers making the trans-Siberian journey, the city serves as the country's major railway junction halfway between Moscow and Vladivostok.

To find maps, more things to do, other places to visit, and other tourist information, refer to the Krasnoyarsk trip planner.

Traveling by flight from Irkutsk to Krasnoyarsk takes 3 hours. Alternatively, you can drive; or take a train. The time zone difference moving from Irkutsk Time (IRKT) to Krasnoyarsk Time (KRAT) is minus 1 hour. Wrap up your sightseeing on the 12th (Thu) to allow time to travel to Yekaterinburg.
more less

Things to do in Krasnoyarsk

©
Catholic Cathedral of the Transfiguration 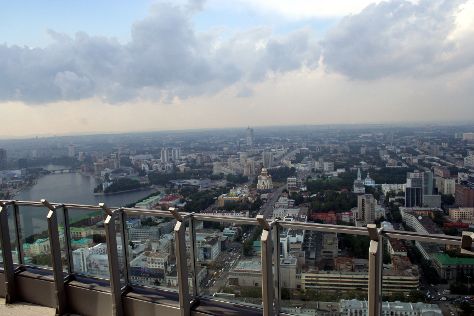 Located at the meeting point of two continents, Yekaterinburg serves as the cultural capital of the Urals region.

You'll explore the less-touristy side of things at Visotsky Business Center Lookout and Weir on river Iset. Next up on the itinerary: make a trip to Ganina Yama Monastery, contemplate in the serene atmosphere at New Tikhvin Nunnery, stroll around Park Green Grove, and pause for some photo ops at Monument to Soldiers of Ural Voluntary Tank Bulk.

To see photos, more things to do, maps, and tourist information, go to the Yekaterinburg day trip app.

Things to do in Yekaterinburg

©
Kungur is a town in the southeast of Perm Krai, Russia, located in the Ural Mountains at the confluence of the Iren and Shakhva Rivers into the Sylva River . Start off your visit on the 16th (Mon): don't miss a visit to Sculpture The Centre of The Universe, admire the striking features of Former House of Dubinin, contemplate in the serene atmosphere at Theotokos of Tikhvin Church, take in the architecture and atmosphere at Church of St. Nicholas, then appreciate the history behind Monument to the Pioneers, and finally explore the fascinating underground world of Kungurskaya Cave.

Traveling by car from Yekaterinburg to Kungur takes 4 hours. In March in Kungur, expect temperatures between 0°C during the day and -10°C at night. Finish your sightseeing early on the 16th (Mon) so you can travel to Kazan.
more less

Things to do in Kungur 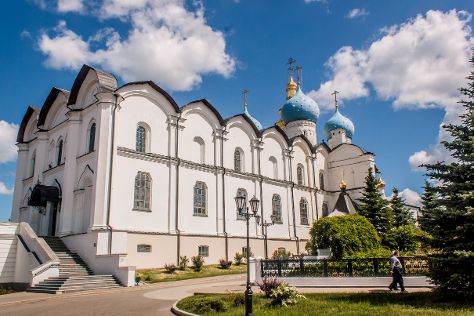 The heart of Tatar culture, Kazan carries the epithet of the "Third Capital of Russia" because of its rich history and thriving economy.

To find where to stay, reviews, more things to do, and more tourist information, refer to the Kazan trip planning site.

Explore your travel options from Kungur to Kazan with the Route module. The time zone difference moving from Yekaterinburg Time to Moscow Standard Time is minus 2 hours. In March, plan for daily highs up to 0°C, and evening lows to -9°C. On the 18th (Wed), you're off to Moscow.
more less

Things to do in Kazan

©
Cathedral of the Apostles Peter and Paul

Start off your visit on the 19th (Thu): contemplate the long history of Red Square, then see the interesting displays at Muzeon Art Park, then contemplate in the serene atmosphere at Krutitskoe Podvorye, and finally admire the masterpieces at Art Gallery of the European and American Countries of the XIX-XX centuries. Here are some ideas for day two: indulge your taste buds at Food & Drink, then walk around Sokolniki Park, and then admire the masterpieces at State Tretyakov Gallery.

To see traveler tips, maps, and other tourist information, go to the Moscow road trip app.

Traveling by flight from Kazan to Moscow takes 5 hours. Alternatively, you can drive; or take a train. Plan for a bit warmer nights when traveling from Kazan in March since evenings lows in Moscow dip to -5°C. Wrap up your sightseeing on the 20th (Fri) to allow time to travel to St. Petersburg.
more less

Built on a desolate swamp as a showcase capital of Imperial Russia, this grand city has certainly lived up to the expectations of its founder, Tsar Peter the Great.

Step off the beaten path and head to WindTunnel FlyStation and Dom Kompanii Zinger. There's lots more to do: admire the masterpieces at The State Hermitage Museum, make a trip to Chasovnya Svyatoy Blazhennoy Ksenii Peterburgskoy, explore the galleries of Saint Isaac's Cathedral, and steep yourself in history at Palace Square.

To see other places to visit, more things to do, maps, and tourist information, go to the St. Petersburg travel app.

Take a train from Moscow to St. Petersburg in 4.5 hours. Alternatively, you can fly; or drive. In March, daily temperatures in St. Petersburg can reach 2°C, while at night they dip to -5°C. On the 23rd (Mon), wrap the sightseeing up by early afternoon so you can travel back home.
more less

Things to do in St. Petersburg