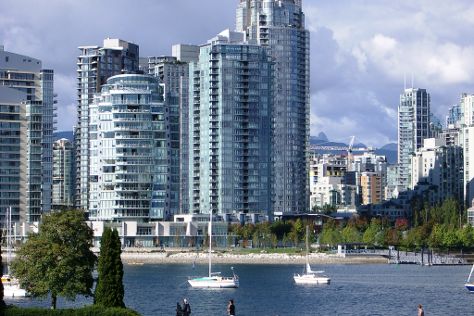 Known as "Hollywood North," Vancouver boasts one of the largest film/television industries in the world, second only to Los Angeles and New York.

On the 7th (Mon), contemplate in the serene atmosphere at St. Francis-in-the-Wood Church, walk around Lighthouse Park, thencontemplate the long history of Engine 374 Pavilion, thentake a stroll through Yaletown, and finally wander the streets of Gastown. Keep things going the next day: take in the exciting artwork at Museum of Anthropology, take in the exciting artwork at Ukama Gallery, and then steep yourself in history at Deep Cove.

Things to do in Vancouver

Nicknamed the "Emerald City" because of its abundant evergreen trees, Seattle is the cultural and business center of the Pacific Northwest, as well as a popular holiday destination.

Popular historic sites such as Pioneer Square and Bruce Lee Grave Site are in your itinerary. Let the collections at Chihuly Garden and Glass and Seattle Asian Art Museum capture your imagination. Next up on the itinerary: see the interesting displays at The Museum of Flight, enjoy the sea views from West Point Lighthouse, admire the landmark architecture of King Street Station, and take in the architecture and atmosphere at Christ Our Hope Catholic Church.

To see maps, photos, and tourist information, you can read our Seattle tour itinerary planner.

Traveling by car from Vancouver to Seattle takes 3 hours. Alternatively, you can fly; or take a shuttle. In December, plan for daily highs up to 9°C, and evening lows to 3°C. Wrap up your sightseeing on the 13th (Sun) early enough to travel to Fort Collins.
more less

Things to do in Seattle

Called vibrant, eclectic and authentic, Fort Collins tops “best of” lists year after year thanks to its myriad of cultural opportunities.

Aspen and Evergreen Gallery and Totally 80's Pizza & Museum are good opportunities to explore the local culture. Museum-lovers will get to explore Gregory Allicar Museum of Art at Colorado State University and Fort Collins Museum of Discovery. When in Fort Collins, make a side trip to see Wild Basin Area in Rocky Mountain National Park, approximately Rocky Mountain National Park away. And it doesn't end there: stop by The Cupboard, take in nature's colorful creations at Gardens on Spring Creek, see the interesting displays at Global Village Museum of Arts and Cultures, and indulge your thirst for a good beer at New Belgium Brewing Company.

For more things to do, maps, and tourist information, go to the Fort Collins visit planner.

Things to do in Fort Collins

Surrounded by mountain ranges, forests, valleys, beaches, and deserts, the metropolitan area of Los Angeles is home to over 17 million people.

Things to do in Los Angeles

City by the Bay

Golden Gate Bridge and Alcatraz Island are good opportunities to explore the local culture. City Lights Booksellers and Grace Cathedral will appeal to history buffs. The adventure continues: engage your brain at Exploratorium, examine the collection at Cable Car Museum, wander the streets of Union Square, and contemplate the long history of SS Jeremiah O'Brien.

Traveling by flight from Los Angeles to San Francisco takes 4 hours. Alternatively, you can drive; or take a bus. Traveling from Los Angeles in December, you will find days in San Francisco are little chillier (17°C), and nights are about the same (8°C). On the 27th (Sun), you'll have the morning to explore before heading back home.
more less

Things to do in San Francisco