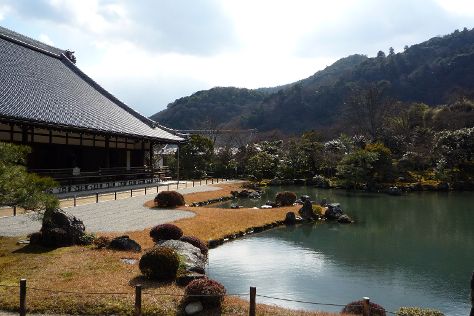 Proud of their hometown's distinct culture and dialect, many natives of Osaka describe their city as "Japan's anti-capital." An antidote to Tokyo's hectic energy, Osaka marches to the beat of its own drum, serving as the country's longtime commercial and industrial hub.

You'll discover tucked-away gems like Tenryuji Temple and Kennin-ji Temple. Get some historical perspective at Toji and Ninna-ji Temple. Get out of town with these interesting Osaka side-trips: Kodai-ji Temple (in Higashiyama), Jojakkoji Temple (in Ukyo) and Arima Onsen (in Kita). There's still lots to do: take in the spiritual surroundings of Sanzen-in Temple, wander the streets of Dotonbori, appreciate the extensive heritage of Hieizan Enryaku-ji Temple, and take in the awesome beauty at Mt. Wakakusa.

To see traveler tips, photos, ratings, and other tourist information, refer to the Osaka visit planner.

Jakarta, Indonesia to Osaka is an approximately 11-hour flight. You can also do a combination of flight and train. You'll lose 2 hours traveling from Jakarta to Osaka due to the time zone difference. In December, Osaka is cooler than Jakarta - with highs of 13°C and lows of 4°C. Wrap up your sightseeing on the 24th (Tue) to allow time to travel to Sendai.
more less

Things to do in Osaka

Human history and nature combine seamlessly in Sendai, with the influence of each never far away in this green and storied city.

To see other places to visit, photos, maps, and more tourist information, use the Sendai trip planner.

You can fly from Osaka to Sendai in 4 hours. Other options are to do a combination of train and flight; or drive. Expect a bit cooler weather when traveling from Osaka in December: highs in Sendai hover around 8°C, while lows dip to 5°C. Wrap up your sightseeing on the 26th (Thu) to allow time to take a train to Tokyo.
more less

Things to do in Sendai 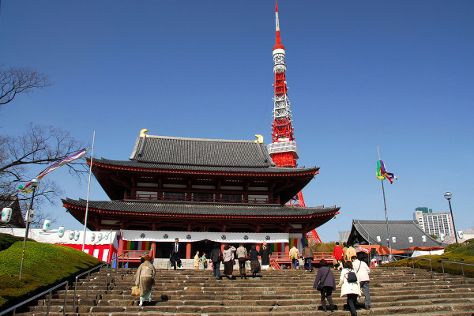 Tokyo holds the status of most populous metropolitan area in the world--a fact you'll find tangible as you walk the bustling streets and explore its diverse neighborhoods and cultures.

You'll discover tucked-away gems like Zojo-ji Temple and Yanaka. Satisfy your inner culture vulture at Minato Mirai 21 and Nezu Shrine. Get out of town with these interesting Tokyo side-trips: Kamakura (Kencho-ji Temple & Hase-dera Temple) and Hakone-machi (Hakone Shrine / Kuzuryu Shrine Singu & Pola Museum of Art). The adventure continues: take a stroll through Ueno, steep yourself in history at Hie Jinjya, examine the collection at Samurai Museum, and contemplate in the serene atmosphere at Kanda Myojin.

You can take a train from Sendai to Tokyo in 2 hours. Other options are to fly; or drive. Expect somewhat warmer weather when traveling from Sendai in December: highs in Tokyo hover around 14°C, while lows dip to 4°C. Wrap up your sightseeing on the 30th (Mon) to allow time to take a bus to Narita.
more less

Things to do in Tokyo

Pilgrims and aviators come to Narita, a town known during the Edo period for its temple, and now known primarily for its airport.

Use Inspirock's suggestions to plan your Narita trip and find the best activities and attractions for your vacation.

Take a bus from Tokyo to Narita in 1.5 hours. Alternatively, you can drive; or take a train. Traveling from Tokyo in December, you can expect nighttime temperatures to be little chillier in Narita, with lows of 1°C. Finish your sightseeing early on the 1st (Wed) so you can travel to Seoul.
more less

Things to do in Narita

You'll discover tucked-away gems like Bukhansan National Park and Deoksugung. Get a sense of the local culture at Gyeongbokgung Palace and Changgyeonggung Palace. The adventure continues: get a taste of the local shopping with Myeongdong Shopping Street, take a stroll through Insadong, don't miss a visit to Bukchon Hanok Village, and tour the pleasant surroundings at Cheonggyecheon Stream.

To see other places to visit, photos, more things to do, and other tourist information, refer to the Seoul visit website .

Things to do in Seoul