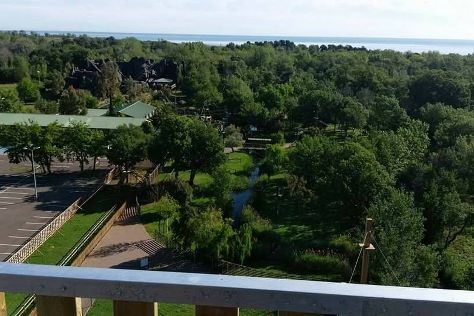 ©
Argelès-sur-Mer is a commune in the Pyrénées-Orientales department in southern France.It is about 25 km from Perpignan.GeographyArgelès-sur-Mer is located in the canton of La Côte Vermeille and in the arrondissement of Céret.Argelès-sur-Mer is on the Côte Vermeille at the foot of the Albères mountain range, close to the Spanish border. Your itinerary includes some good beach time at Crique du Porteil and St-Cyprien Plage. Attractions like Promenade du Front de Mer and Canyoning Park make great kid-friendly stops. Explore the numerous day-trip ideas around Argeles-sur-Mer: Château de Salses (in Salses-Le-Chateau), Le Sentier Sous-Marin de Cerbere-Banyuls (in Cerbere) and Rivesaltes (Domaine Boudau & Arnaud de Villeneuve). And it doesn't end there: look for all kinds of wild species at Sentier du Littoral, admire nature's wide array of creatures at Les Aigles de Valmy, cool off at DROP IN Water Jump Parc, and relax in the rural setting at Ferme de Decouverte Saint-Andre.

To find more things to do, photos, traveler tips, and more tourist information, go to the Argeles-sur-Mer itinerary tool.

Strasbourg to Argeles-sur-Mer is an approximately 7.5-hour combination of flight and train. You can also take a train; or drive. Expect a bit warmer evenings in Argeles-sur-Mer when traveling from Strasbourg in August, with lows around °C. Wrap up your sightseeing on the 10th (Mon) to allow time to drive to Villefranche-de-Conflent.
more less

©
Villefranche-de-Conflent is historically a town in the Conflent region of Catalonia, and now a commune in the Pyrénées-Orientales department in southern France.GeographyLocalityVillefranche-de-Conflent is located in the canton of Les Pyrénées catalanes and in the arrondissement of Prades.The town's confined site, at about 440 m above sea level, is relatively level ground surrounded by the northeast-flowing river Têt (on the town's west and north), the Cady, which flows north to empty into the Têt (on the east), and a peak (at nearly 800 m), less than 800 m away (on the south).TransportRoadsThe N116 from Perpignan on the Mediterranean passes, as a two-lane highway, between the southern town wall and an embankment cut into the high ground to the south; this route continues west into the adjacent Cerdagne region.Train The town's train station starts and ends the route of the scenic Yellow train. Kids will appreciate attractions like Grotte des Canalettes and Canyoning & Rappelling Tours. Explore Villefranche-de-Conflent's surroundings by going to Maury (Mas Amiel & Domaine Thunevin Calvet), Domaine Revelh (in Cassagnes) and Ansignan Roman Aqueduct (in Ansignan). And it doesn't end there: don't miss a visit to Ramparts of Villefranche-de-Conflent, pause for some serene contemplation at Eglise Saint-Pierre, head outdoors with Cova Bastera, and contemplate the long history of Fort Liberia.

Things to do in Villefranche-de-Conflent