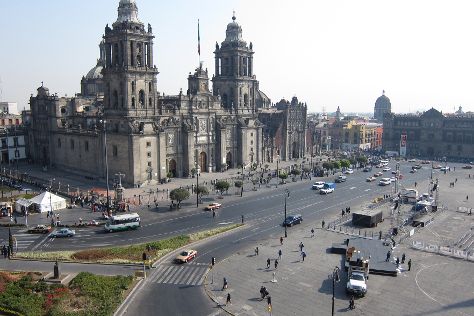 To find reviews, more things to do, photos, and other tourist information, you can read our Mexico City sightseeing planning tool.

Berlin, Germany to Mexico City is an approximately 17.5-hour flight. You can also do a combination of train and flight. The time zone changes from Central European Time to Central Standard Time, which is usually a -7 hour difference. In maggio, plan for daily highs up to 30°C, and evening lows to 16°C. Cap off your sightseeing on the 7th (Thu) early enough to go by car to San Juan Teotihuacan.
more less

Things to do in Mexico City

Historic Sites Museums Neighborhoods
Find places to stay May 4 — 7:
Hotels on TripAdvisor
Homes on Airbnb
Highlights from your plan

Home to perhaps the most impressive of Mexico's archaeological sites, San Juan Teotihuacan provides easy access to the World Heritage-listed "City of Gods," the largest pre-Columbian urban center in the Americas.

To find traveler tips, other places to visit, where to stay, and more tourist information, you can read our San Juan Teotihuacan day trip planner.

Drive from Mexico City to San Juan Teotihuacan in 1.5 hours. Alternatively, you can take a bus. Wrap up your sightseeing on the 9th (Sat) to allow time to travel to Chichen Itza.
more less

Things to do in San Juan Teotihuacan

Convento Agustino, Ex Convent of Acolman
Find places to stay May 7 — 9:
Hotels on TripAdvisor
Homes on Airbnb
Highlights from your plan

Featuring the largest archeological site of the ancient Mayan civilization, Chichen Itza remains one of the most visited tourist destinations in Mexico.

To see other places to visit, ratings, maps, and more tourist information, go to the Chichen Itza trip builder app.

Traveling by combination of bus and flight from San Juan Teotihuacan to Chichen Itza takes 8.5 hours. Alternatively, you can drive; or take a bus. The time zone changes from Central Standard Time to Eastern Standard Time, which is usually a 1 hour difference. In maggio in Chichen Itza, expect temperatures between 40°C during the day and 30°C at night. Finish your sightseeing early on the 10th (Sun) so you can drive to Tulum.
more less

Things to do in Chichen Itza

Parks Nature Historic Sites
Find places to stay May 9 — 10:
Hotels on TripAdvisor
Homes on Airbnb
Highlights from your plan

©
Temple of the Bearded Man

The only Mayan site built to overlook the ocean, Tulum remains a coastal paradise preserving the last vestiges of a pre-Hispanic civilization.

Get some historical perspective at Tulum Archaeological Site and Cobá Zona Arqueológica Cobá. Your itinerary includes some good beach time at Paradise Beach and Mayan Beach. Step out of Tulum with an excursion to Scuba & Snorkeling in Playa del Carmen--about 1h 05 min away. There's much more to do: stroll through Akumal Beach, get engrossed in the history at Museo de la Prehistoria Parque Dos Ojos, look for gifts at Kaahal Home Tulum, and make a trip to Plastic Flamingo.

To find traveler tips, reviews, and other tourist information, use the Tulum trip website.

Drive from Chichen Itza to Tulum in 2 hours. Alternatively, you can take a shuttle; or take a bus. Expect little chillier temperatures when traveling from Chichen Itza in maggio; daily highs in Tulum reach 34°C and lows reach 25°C. Finish your sightseeing early on the 14th (Thu) so you can drive to Cozumel.
more less

Things to do in Tulum

Thanks to the island's outstanding scuba diving and snorkeling options, Cozumel tourism sector remains a major employer and the main source of income for this Caribbean getaway.

Get some cultural insight at Museo de la Isla de Cozumel and Zona Arqueológica del Cedral. There's lots more to do: see some colorful creatures with a scuba or snorkeling tour, indulge in some personalized pampering at some of the best spas, explore the gorgeous colors at Santa Rosa Wall, and play a few rounds at Cozumel Country Club.

To see traveler tips, photos, and other tourist information, use the Cozumel trip builder site.

Traveling by car from Tulum to Cozumel takes 2.5 hours. In maggio, daily temperatures in Cozumel can reach 34°C, while at night they dip to 25°C. Finish your sightseeing early on the 18th (Mon) so you can travel back home.
more less

Things to do in Cozumel

Outdoors Wildlife Parks
Find places to stay May 14 — 18:
Hotels on TripAdvisor
Homes on Airbnb
Highlights from your plan
©
Scuba & Snorkeling