The state's commercial, if not political hub, Ahmedabad stands as a sprawling metropolis with some important historical sites.

Explore the numerous day-trip ideas around Ahmedabad: Gandhinagar (Akshardham & Capital Complex). And it doesn't end there: contemplate the long history of Sabarmati Ashram / Mahatma Gandhi's Home, contemplate in the serene atmosphere at Jami Masjid, delve into the distant past at Ambapur Stepwell, and admire the striking features of Adalaj Stepwell.

Use the Route module to find suitable travel options from your home destination to Ahmedabad. In February in Ahmedabad, expect temperatures between 36°C during the day and 18°C at night. Finish up your sightseeing early on the 3rd (Wed) so you can go by car to Mehsana.
more less

Things to do in Ahmedabad

Gandhinagar
Find places to stay Feb 1 — 3:
Hotels on TripAdvisor
Homes on Airbnb
Highlights from your plan

©
Mehsana, also spelled Mahesana, is a city and municipality in Mehsana district, in the Indian state of Gujarat.HistoryMehsaji Chavda, a Rajput and an heir of Chavda dynasty, established Mehsana. Start off your visit on the 4th (Thu): walk around Tirupati Natural and Water Prak, then make a trip to Shree Umiya Mata Temple, and then steep yourself in history at Simandhar Swami Jain Temple. Keep things going the next day: contemplate in the serene atmosphere at Maatangi Modheshwari Temple, then delve into the distant past at Sun Temple, and then contemplate in the serene atmosphere at Smvs Shri Swaminarayan Mandir.

Drive from Ahmedabad to Mehsana in 2 hours. In February, daily temperatures in Mehsana can reach 36°C, while at night they dip to 18°C. Finish up your sightseeing early on the 5th (Fri) so you can travel to Bhuj.
more less

Things to do in Mehsana

Established long ago as an important regional city, Bhuj has had to rebuild on several occasions due to devastating earthquakes destroying its temples, palaces, and residential areas.

Bhuj is known for nature, historic sites, and museums. Your plan includes some of its best attractions: admire nature's extreme beauty at White Desert Of Kutch, contemplate the waterfront views at Great Rann of Kutch, get engrossed in the history at Sharad Baug Palace, and make a trip to Dattatreya Temple at Kalo Dungar.

Traveling by car from Mehsana to Bhuj takes 6.5 hours. February in Bhuj sees daily highs of 37°C and lows of 18°C at night. Finish your sightseeing early on the 8th (Mon) so you can drive to Dwarka.
more less

Things to do in Bhuj

Great Rann of Kutch
Find places to stay Feb 5 — 8:
Hotels on TripAdvisor
Homes on Airbnb
Highlights from your plan

Way out west, the small city of Dwarka has a long history of pilgrimage, as a place central to Hindu mythology and belief.

Start off your visit on the 9th (Tue): make a trip to Shri Swaminarayan Mandir, Dwarka, then make a trip to Shree Dwarkadhish Temple, then take in the spiritual surroundings of Bhadkeshwar Mahadev Temple, and finally take in the spiritual surroundings of Rukshamanee Mandir. Here are some ideas for day two: contemplate in the serene atmosphere at Nageshwar Jyotirlinga Temple, head off the coast to Beyt Dwarika, and then don't miss a visit to Gomti Ghat.

To see ratings, traveler tips, photos, and other tourist information, you can read our Dwarka trip maker tool.

Traveling by car from Bhuj to Dwarka takes 6 hours. Alternatively, you can take a bus. Finish your sightseeing early on the 10th (Wed) so you can drive to Somnath.
more less

Things to do in Dwarka

Tourism in Somnath (officially known as Prabhas Patan) revolves around its famous Jyotirlinga of Shiva.

You can drive from Dwarka to Somnath in 3.5 hours. Alternatively, you can take a train; or take a bus. Cap off your sightseeing on the 11th (Thu) early enough to go by car to Sasan Gir.
more less

Things to do in Somnath 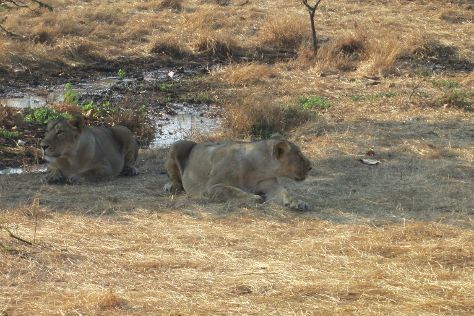 Fulfill your wildlife fantasies at Sasan Gir, the only place in Asia where you can still see lions roaming free in the wild.

Start off your visit on the 12th (Fri): explore the wealth of natural beauty at Sasan Gir National Park and then look for all kinds of wild species at Devalia Safari Park.

To find other places to visit, reviews, traveler tips, and tourist information, use the Sasan Gir journey builder.

Traveling by car from Somnath to Sasan Gir takes 1.5 hours. Finish your sightseeing early on the 12th (Fri) to allow enough time to travel to Rajkot.
more less

Things to do in Sasan Gir

Visit Mahatma Gandhi's childhood home and other cultural attractions in Rajkot, a large industrial city with a historical old town.

Rajkot is known for historic sites, museums, and theme parks. Your plan includes some of its best attractions: take in the spiritual surroundings of Shri Ramakrishna Ashrama, see human ingenuity at work at Nyari Dam, identify plant and animal life at Pradyuman Park, and find something for the whole family at Funworld Rajkot.

Getting from Sasan Gir to Rajkot by car takes about 3.5 hours. February in Rajkot sees daily highs of 37°C and lows of 19°C at night. Wrap up your sightseeing on the 15th (Mon) early enough to travel back home.
more less

Things to do in Rajkot