Rome is known for historic sites, nightlife, and museums. Your plan includes some of its best attractions: pause for some serene contemplation at St. Peter's Basilica, delve into the distant past at Pantheon, get to know the fascinating history of Piazza Navona, and contemplate the long history of Colosseum.

London, UK to Rome is an approximately 6-hour flight. You can also take a train; or do a combination of car and train. The time zone difference when traveling from London to Rome is 1 hour. Plan for somewhat warmer temperatures traveling from London in June, with highs in Rome at °C and lows at °C. Wrap up your sightseeing on the 23rd (Fri) early enough to travel to Magliano in Toscana.
more less 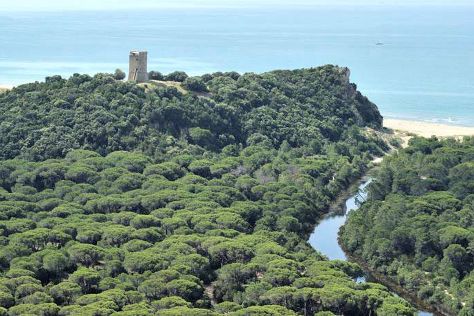 ©
Magliano in Toscana is a comune (municipality) in the Province of Grosseto in the Italian region Tuscany, located about 130km south of Florence and about 25km southeast of Grosseto.Magliano in Toscana borders the following municipalities: Grosseto, Manciano, Orbetello, Scansano. On the 23rd (Fri), admire the natural beauty at Giardino dei Tarocchi, tour the pleasant surroundings at Marina di Alberese, and then learn about winemaking at Azienda Agricola Celestina Fe'. Here are some ideas for day two: explore the wealth of natural beauty at Parco Naturale della Maremma.

To see other places to visit, ratings, and other tourist information, read our Magliano in Toscana day trip site.

Traveling by car from Rome to Magliano in Toscana takes 2.5 hours. In June in Magliano in Toscana, expect temperatures between °C during the day and °C at night. Cap off your sightseeing on the 25th (Sun) early enough to travel to Florence.
more less

Things to do in Magliano in Toscana

Step out of Florence with an excursion to Leaning Tower of Pisa in Pisa--about 1h 10 min away. The adventure continues: explore the world behind art at Gallerie Degli Uffizi, take in panoramic vistas at Campanile di Giotto, admire the striking features of The Baptistery of St. John, and steep yourself in history at Basilica of Santa Croce.

Getting from Magliano in Toscana to Florence by car takes about 2.5 hours. Expect a daytime high around °C in June, and nighttime lows around °C. Wrap up your sightseeing by early afternoon on the 28th (Wed) to allow time for the car ride to Venice.
more less

Leaning Tower of Pisa
Find places to stay Jun 25 — 28:
Hotels on TripAdvisor
Homes on Airbnb
Highlights from your plan

Venture out of the city with trips to Padua (Scrovegni Chapel & Basilica of St. Anthony). Next up on the itinerary: explore the activities along Canal Grande, get to know the fascinating history of Piazza San Marco, snap pictures at Ponte di Rialto, and take in the architecture and atmosphere at Basilica di San Marco.

To see ratings, other places to visit, more things to do, and more tourist information, you can read our Venice online trip builder.

Getting from Florence to Venice by car takes about 3 hours. Other options: take a train; or fly. In June, plan for daily highs up to °C, and evening lows to °C. Finish your sightseeing early on the 2nd (Sun) so you can travel back home.
more less