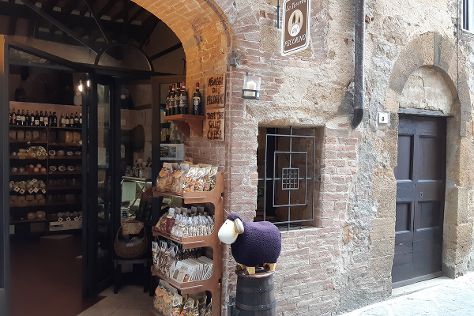 ©
Pienza, a town and comune in the province of Siena, in the Val d'Orcia in Tuscany (central Italy), between the towns of Montepulciano and Montalcino, is the "touchstone of Renaissance urbanism."In 1996, UNESCO declared the town a World Heritage Site, and in 2004 the entire valley, the Val d'Orcia, was included on the list of UNESCO's World Cultural Landscapes.HistoryBefore the village was renamed to Pienza its name was Corsignano. You've now added La Taverna del Pecorino to your itinerary. On the 21st (Mon), relax and rejuvenate at some of the best spas, take a stroll through Monticchiello, make a trip to Piazza Grande a Montepulciano, contemplate in the serene atmosphere at Cathedral, then make a trip to Piazza Pio II, and finally stop by La Taverna del Pecorino.

Make your Pienza itinerary with Inspirock to find out what to see and where to go.

If you are flying in from United States, the closest major aiports are Perugia San Francesco d'Assisi – Umbria International Airport, Peretola Airport and Pisa International Airport. In October, daily temperatures in Pienza can reach 73°F, while at night they dip to 56°F. Wrap up your sightseeing on the 21st (Mon) early enough to travel back home.
more less

Things to do in Pienza

Piazza Grande a Montepulciano, Spas
Find places to stay Oct 21 — 22:
Hotels on TripAdvisor
Homes on Airbnb
Highlights from your plan